Making logical arguments for the existence of God may seem like new territory for a lot of people today, but in reality, these kinds of logical discussions of the theological are nothing new. Throughout time, man has pondered his existence and asked the question of why we are here. Why is there something rather than nothing? It is a question that deserves thoughtful consideration.

Back in the mid-1200s, Thomas Aquinas, an Italian Dominican friar, philosopher, and theologian, pondered this very question. Why are we here and what could explain our existence? To answer this question, he formulated five arguments to demonstrate that a god must exist.

Three of his five arguments rest on the concept that there cannot be an infinite regress of things, so we would do well to define those terms before we explore his arguments for the existence of God. Infinite regress means going back into the past forever, which Aquinas explains is not possible. We cannot move infinitely back in time. It implies the universe is finite and must have started from some certain point in time.

The amazing thing is Aquinas reached this conclusion based on logic in the 1200s. But in the 1920s, Russian scientist Alexander Friedmann developed mathematical equations that determined the universe was indeed expanding from a single point in the finite past, meaning the universe did not go back in time infinitely. He stated that all matter, energy, space, and time came into being at this initial cosmological singularity. It rules out the idea of infinite regress, just as Aquinas concluded.

By 2003, Arvind Borde, Alan Guth, and Alexander Vilenkin reiterated this point by concluding that any universe which has been expanding throughout its history cannot be eternal in its past. It must have an absolute beginning. As Vilenkin stated, “Cosmologists can no longer hide behind a past-eternal universe. There is no escape. They have to face the problem of a cosmic beginning.” Any adequate model of the universe must have a finite beginning, and therefore no infinite regress.

What does that have to do with the existence of God? Here is how Thomas Aquinas explained it.

1.       Argument from motion: Everything in the universe is in motion, from planets to subatomic particles. Something moving, though, must be set into motion by something else. But when we look around the universe, everything else is already in motion. We cannot have an infinite regress of things in motion setting other things in motion, meaning we cannot go forever back into the past with things always being in motion. The motion must be traced back to an initial “unmoved mover” outside of the system. It prompts the question, what set the first thing in motion?

You could imagine it as a train of dominos that are falling over. You cannot have an eternity of just falling dominos. Somewhere there was a first domino knocked over that set everything else into motion. Something outside of the domino system had to push over that first domino. For the universe then, there must have been some moment in time when nothing was in motion, and then something put everything else in motion. There must be an Unmoved Mover. 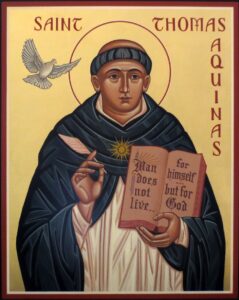 2.       Argument from causation: Aquinas points to the simple logic of cause and effect. Nothing can cause itself; every material “effect” is caused by something else. However, we cannot have an infinite regress of causes. We cannot go back in time indefinitely with always some prior cause. Somewhere there must be an initial cause that caused the first effect. There must be some first Uncaused Cause, one that is outside of this system of causes and effects.

Everything in this universe is contingent and dependent on something else to bring it into being. This means it is possible for it to have never existed and it can at any point stop existing. Something that exists contingently needs an explanation as to why it came into existence because it is not necessary that it exist. Its existence is not inevitable.

4.       Argument from degrees: Aquinas observed that we tend to measure things in a manner of degrees. We judge things as better or worse, more or less fair, more right or less wrong. But in order to judge on a manner of degrees like that, we must have some standard by which to judge. You can only say which line is more or less crooked if you know what an absolutely straight line looks like.

Aquinas then made the connection that if we are making moral judgments, then we must have some moral standard by which to judge. However, there is nothing we observe on earth that could set this perfect moral standard. We couldn’t look out across mankind and nature and find that perfect standard by which we judge everything else. Only a perfect moral entity that is outside of this universe could give us a concept of what moral perfection is. And then we are able to see the varying degrees by which we fall away from that standard.

5.       Argument from design: Where there is design and order, there must be something that designed and ordered it. We recognize this concept in our everyday life. Where things have been organized and planned, we know that something intelligent was responsible for organizing and planning it.

Aquinas made the same connection to this universe. Where nature demonstrates design and order, the cause must be something intelligent that could design and order it. And while Aquinas had no idea what DNA and the genetic code were, he still recognized the unmistakable evidence of design in nature that could not be brought about from a chaotic, unorganized process. To Aquinas, the design in the universe pointed to a Designer.

Based on his observations of the universe and his application of logic, Aquinas concluded there must be an Unmoved Mover, Uncaused Cause, Necessary, and Moral Intelligent Designer who is responsible for our existence. Ultimately, Aquinas noted that the universe requires some explanation and it can’t be itself.

2 thoughts on “5 Arguments for the Existence of God”