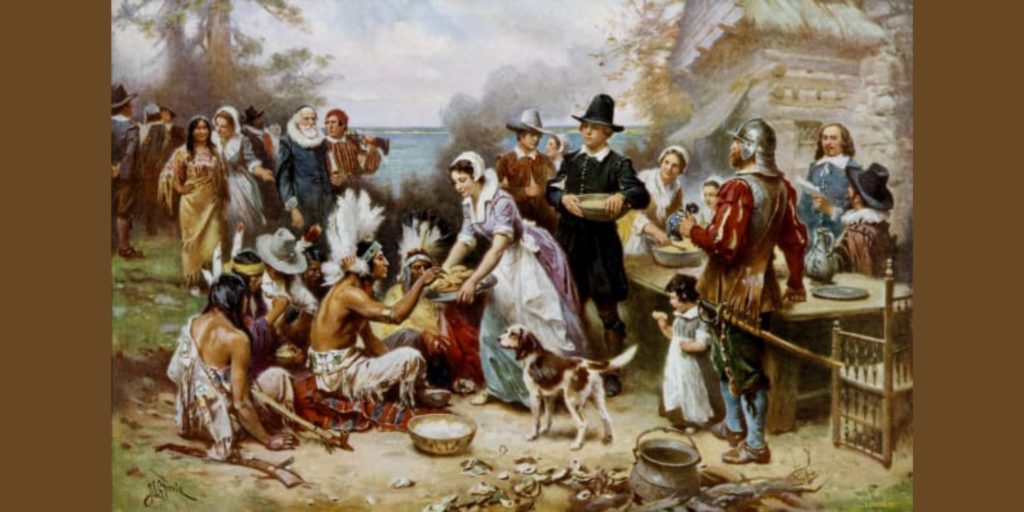 At their first harvest, the Pilgrims sat down with the Indians for a feast of Thanksgiving. We are all familiar with the story. They said a prayer of thanks to God for providing for them. But we tend to forget the true circumstances surrounding this first harvest.

In September 1620, the Mayflower set sail from England with 102 passengers. The Pilgrims on board were heading to America with the hopes of finding a better place of living where the children would not be “drawn away by evil examples into extravagance and dangerous courses” as they had been experiencing in the Netherlands, along with the “great hope, for the propagating and advancing the gospel of the kingdom of Christ in those remote parts of the world.”

As they crossed the Atlantic, they encountered severe storms that almost sank the boat. The conditions on board were cramped and harsh. Food was scarce or had been eaten by worms. Two passengers died on the trip.

The Pilgrims landed at what is now known as Plymouth rock on November 9, 1620. The area appeared to be a good place to set up their new homes. It was an abandoned Indian settlement, where they were able to acquire seed to plant corn for the following year. The Pilgrims immediately saw this as God’s provision and mercy. Without that, they would not have had any other way to find seeds until it was too late for the planting season.

But things took a turn for the worse. On their initial landing they were attacked by indigenous people but were able to fight them off. By December, most of the people had become deathly ill, many of them suffering from scurvy. The snow and ice hindered any hopes of exploring the area and made living conditions nearly unbearable. The first house wasn’t completed until January, and it immediately became a hospital for the sick. There was barely enough food. They were fearful of the neighboring Indians, so they posted a guard to continually stand watch over the vulnerable colony.

Half of the Pilgrims died that winter. They buried their dead in secret graves at night so the Indians wouldn’t know how few were left and how weakened their colony had become. So many had become sick that at times only six or seven individuals were able to feed and care for the rest of the group. Half of the crew of the Mayflower had died as well. By March, only 47 colonists had survived.

When spring finally came, the colony started to improve. The Pilgrims were able to plant and build, slowly regaining their strength. Friendly Indians came into the colony to help. In April, the crew sailed the Mayflower back to England, but all of the colonists chose to stay. When the first harvest came in, the Pilgrims finally had sufficient food, homes, and nearby friends. The first Thanksgiving feast was a true celebration to give thanks to God.
But…they had lost 55 of their friends and family the previous year. They had struggled and nearly died through this ordeal. Yet they were still thankful, not for all the things that had happened, but in all things.

For many people, this time of year is exceedingly difficult, especially this particular year. We have been through a lot as individuals, as families, and as a nation. So we may have a hard time being thankful. That is where we must remember that God tells us to be thankful in all things and thankful for the steadfast love of God.

We may not be thankful for the difficulties we have endured, but we are to be thankful in these difficulties. Hebrews 12:28-29 reminds us, “Therefore, since we are receiving a kingdom that cannot be shaken, let us be thankful, and so worship God acceptably with reverence and awe, for our God is a consuming fire.”

As we remember the suffering of people like David, who was hunted down by Saul for nearly 8 years, and Paul, who was beaten and imprisoned in every town he entered, who still gave thanks to God in all circumstances, then we know that we can too.

Psalm 106:1 Praise the Lord! Oh give thanks to the Lord, for He is good, for His steadfast love endures forever.

Psalm 107:21 Let them give thanks to the Lord for his unfailing love and his wonderful deeds for mankind.

Colossians 3:16-17 Let the word of Christ dwell in you richly, teaching and admonishing one another in all wisdom, singing psalms and hymns and spiritual songs, with thankfulness in your hearts to God. And whatever you do, in word or deed, do everything in the name of the Lord Jesus, giving thanks to God the Father through him.

1 Thessalonians 5:18 Give thanks in all circumstances; for this is the will of God in Christ Jesus for you.

Philippians 4:6 Do not be anxious about anything, but in everything by prayer and supplication with thanksgiving let your requests be made known to God.

1 Samuel 12:24 Only fear the Lord and serve him faithfully with all your heart. For consider what great things he has done for you.