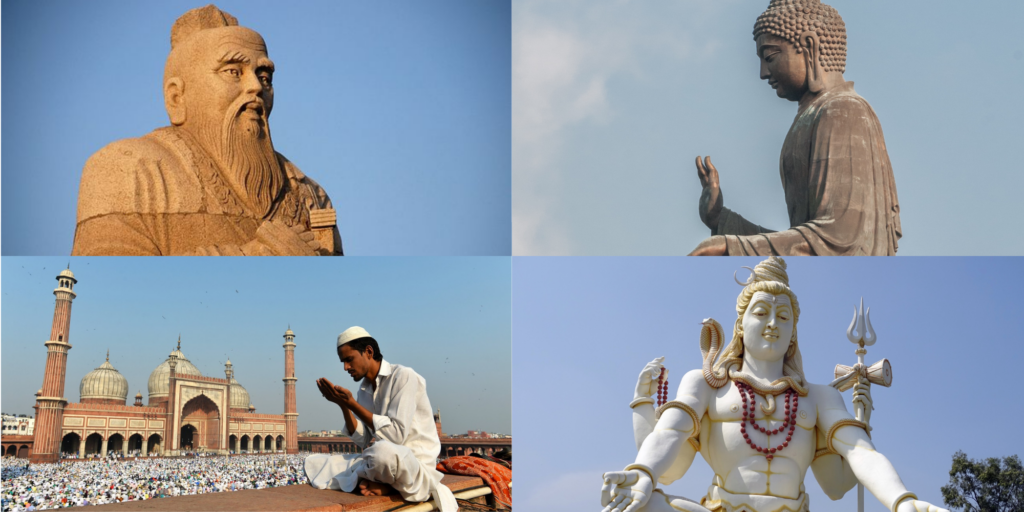 I was excited the past few weeks in our homeschool history lessons to teach my children about Mohamed and the founding of Islam. Yes, you read that correctly. Over the past two years we have studied most of the major world religions: Hinduism, Buddhism, Confucianism, Shintoism, and now Islam. We’ve even covered ancient religions like the gods and goddesses of the Egyptian, Greek, and Roman Empires. And it has been one of my favorite things to teach.

I have taught them how these other religions began, who the founding leaders are, how they obtained their religious texts, what these religions claim – and most importantly, how these beliefs contrast with Christianity. I want my kids to know there are a lot of different beliefs out there, but that doesn’t make all those different beliefs true. So we discuss the doctrines of these other religions and determine if they adequately address reality, humanity, and the condition of the human heart.

Now, you may find it surprising that a Christian apologist homeschooling mom would enjoy teaching her children these other religions, but it is incredibly important to do so. As Christians, we are commanded to go into the world and preach the Gospel. In order to do that, we must understand what “the world” believes. This is important for all of us for several reasons.

1) It helps us present the Gospel more effectively. Without knowing the beliefs others hold, we don’t know how best to present the truth of Christianity. The truth about Christianity doesn’t change, but our conversations about it changes. In order to speak adequately to another person about Christianity we must know if the person believes there is no god at all or if the person believes there are millions of gods. The conversation will change depending on whether the person believes in reincarnation or an afterlife based on works or that there is no life after death. Different people will struggle in different areas of understanding the truth of Christianity. By knowing what others believe, we can do a better job of breaking down those individual barriers.

2) We must understand that when we discuss Christianity with an unbeliever, we are challenging very deeply held beliefs. Most people we encounter have been very committed to their own belief system for their entire lives. They are not likely to abandon their previously held beliefs from a single conversation.

Nor should they! No one should make a religious decision that quickly. Christianity is not just some new fashion to try on to see if it works. Christianity requires you to die to yourself, deny yourself, pick up your cross, and daily follow Jesus. It is a covenant and relationship that we must enter into with an eyes-wide-open understanding of that commitment. In order to speak into those deeply held beliefs, we need to understand what those deeply held beliefs are.

3) It helps us recognize what is at stake for someone to become a Christian. Trading out one worldview for another worldview is not like switching from chocolate to vanilla ice cream. It oftentimes has heavy consequences. For many people around the world, becoming a Christian means forfeiting your job, being cut off from your family, losing your children, or even having your own life threatened.

Jesus said we must count the cost for following Him. So we must be aware of the costs for many people to come to Jesus. Obviously, in light of eternity, the cost of what we give up now is worth it. But it is still a cost that many people must consider more seriously than others. By knowing about other religions, you can have a greater appreciation of those costs for people and how you can support them through those life-altering changes.

4) It helps us have compassion on the lost. When Jesus looked out at the crowds, He had compassion on them, for they were “like sheep without a shepherd.” People who believe different things from Christianity are not the enemy; they are deceived by the enemy. Satan is the father of lies and the great deceiver who uses ideas to lead people away from the truth about God. This is why we must heed Paul’s words to tear down strongholds and demolish ideas that are set against the knowledge of God.

By learning about other religions, we can see how they are being deceived. And it should break our hearts to see people who are working toward and following after a religion that is false.

If someone has gotten their ideas about God from something other than the Bible, then I may reject that idea of God as well! One example is found with Islam. Islam claims the title for Jesus as “Son of God,” means God had relations with a human woman to produce a child. That is not what is meant by that name at all. Jesus was not “born,” as in created, but rather as taking on human form. Jesus was, is, and always will be God. He is eternal and was present at the creation of all things (John 1). And then the “Word became flesh and dwelt among us.” This is a major theological point that must be clarified.

By understanding what other religions claim, not only for their own belief system, but about Christianity, we can clarify these false ideas about God, Jesus, and the Bible.

Ultimately, we must recognize that no one we encounter is a blank slate. Everyone comes with their own set of ideas and beliefs about the world, about god, and about humanity. (Even children have a “worldview” of sorts since they think they are the center of the world!)

If we are going to reach others with the Gospel we must take a moment to understand what it is they currently believe. And we must take the time to ask them questions about what they believe. It lets the other person know that we truly value them, instead of just wanting to shove our ideas onto them. It enables us to see how to reach out to them with the Gospel by knowing where they may struggle with the concepts of sin and grace.