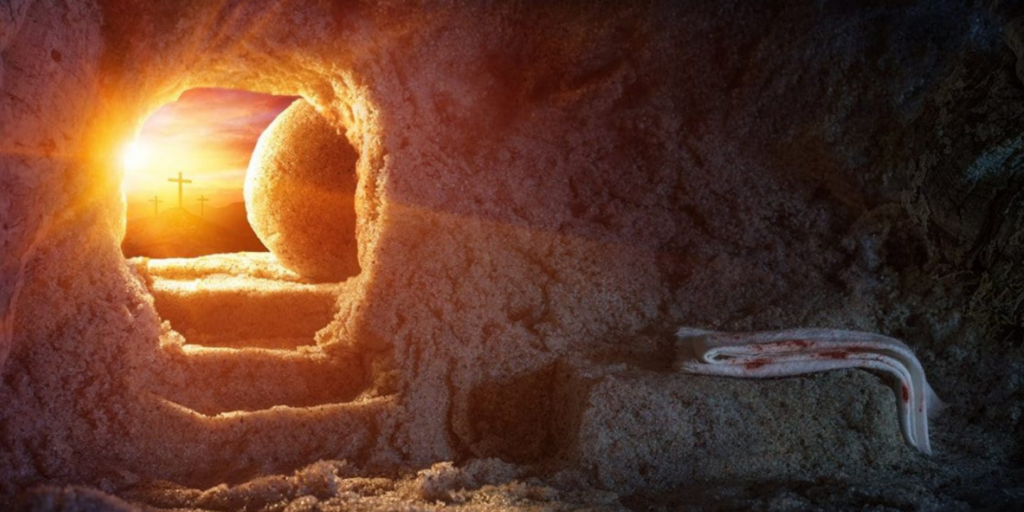 When you think about other world religions, they all have some prophet or messenger who was delivering an important message – either from god or how to reach god. And eventually all of these prophets and messengers dies. Buddha died in 949 BC. Confucius died in 479 BC. Mohammed died in 632 AD. Joseph Smith, the founder of Mormonism, died in 1844. Mary Baker Eddy, the founder of Christian Science, died in 1910.

But in Christianity, the religious leader claimed to actually be God Himself. Then He died and three days later resurrected, and 40 days later ascended into Heaven.

If we look at ancient world religions, many of them incorporate deities who died and then resurrected. Osiris was an ancient Egyptian deity who briefly resurrected to have a child with Isis and then died again. The Egyptians then associated Osiris with the flooding season of the Nile.

Dionysus, the Greek god of wine, was birthed out of Zeus’s thigh after Zeus rescued him before his mother died. As an infant, Dionysus was supposedly chopped up and eaten by the Titans. The goddess Athena preserved his heart and resurrected him.

The Epic of Gilgamesh, an ancient Mesopotamian piece of literature, features the Sumerian king referring to the resurrection of Tammuz as the explanation for fertile soil after the scorching Mesopotamia summers.

This same story is found later in Roman mythology as Adonis is resurrected from Hades every year to cause Aphrodite to bring about spring. The ancient Greek/Phrygian tale of Attis is another resurrection story whose death and rebirth is concurrent with harvest/winter and spring/summer.

If these ancient religions have their own gods who die and then resurrect, then is Christianity just recycling the same ancient myth when we claim that Jesus, the Son of God, resurrected?

Unlike those ancient myths, the resurrection of Jesus is central to our entire belief and hope. As Paul says in 1 Corinthians 15, “If there is no resurrection of the dead, then Christ is not risen. And if Christ is not risen, then our preaching is empty and your faith is empty…your faith is futile; you are still in your sins!…If in this life only we have hope in Christ, then we are of all men to be the most pitied.”

Paul is right. We should be the most pitied for putting all our faith and hope in a resurrection – if that resurrection never happened.

So how do we know that it did?

1) We must consider some drastic differences between the resurrection accounts from those ancient belief systems and that of Christianity. Though the ancient tales contain different resurrected deities from different regions of the world, they tend to have a common theme. All of those accounts are using mythological stories to explain some natural phenomena, typically the changing of the seasons. These belief systems are linking the idea of “resurrection” to the “rebirth” of spring.

2) The ancient accounts of gods and goddesses resurrecting are not verified by historical evidence. Those stories are written down as myths. While we typically use the term myth to just mean “something that is not true,” the word myth has a definition as a work of literature. According to The Ohio State University site for Archaeological Excavations in Greece, “The oldest definition of the Greek word mythos comes from Homer, and it means “word,” “speech,” or “story,” without any of the connotations of falsehood that our term myth has.”

In his book Greek Mythology, Fritz Graf defines myth as a “traditional tale” that is adaptable to many literary genres but must remain relevant to the culture in which it is written. The earliest form of myths is found in epic poetry. Thus, the first time we encounter Greek mythology is through the writings of Homer in the Iliad and The Odyssey from the 8th century BC.

Since many myths were recited orally and then adapted to each culture, there is no set “doctrine” of the ancient mythologies. But the general theme of these myths are multiple gods and goddesses that represent or rule over certain natural features. For example, there are gods (or goddesses) of the sea, the grain, the wilderness, music, crafts, fire, wine, and fertility.

Instead of a deity above and outside of nature, these gods represent some aspect of nature. And though they are “gods,” they truly function just like humans, only with more power and more wickedness. Their stories are a jumbled up soap opera as they use humans as pawns to get their selfish desires.

What these stories lack though are historical evidence. We have evidence that these ancient cultures worshiped these deities; we see their temples and shrines and statues. But the evidence behind the truth of these deities is nonexistent.

Some experts say these myths were generated as a means of explaining the natural world, thus the gods represent different aspects of nature. Some have concluded myths were a form of history, culture documenting actual kings and queens many years after their deaths with exaggerations of their lives, which led to them being worshiped as gods.

Others think myths were used as a way to explain the culture’s rites and rituals for worship. Maybe the people wanted a festival to celebrate the fruit of the vine so they recounted a story about the god of wine, Dionysus, and established the festival in honor of him.

This is drastically different from the accounts of the resurrection of Jesus. We have historical evidence of Jesus’ life, His teachings, and His miracles as they were written down by those who witnessed these events first-hand. The Gospel of Matthew was written by Matthew the tax collector, one of Jesus’ disciples. From his gospel, we get a first-hand eyewitness account of Jesus from someone who was there from Jesus’ baptism to His ascension and everything in between.

The Gospel of Mark was written by John Mark, Barnabas’s cousin. He was also a traveling companion of Paul and Peter. In his first epistle, Peter refers to Mark as his “spiritual son,” and in 2 Timothy 4, Paul requests Mark to come see him because “he is useful to [him] for ministry.” In fact, Papias, the bishop of Hierapolis, wrote in AD 130, “The Apostle John used to say this also: Mark, having been the interpreter of Peter, wrote down accurately all that Peter mentioned.” New Testament scholars have also stated that Mark’s use of pronouns in accounts involving Peter seem to be a reminiscence by Peter himself.

The Gospel of Luke was written by Luke, a doctor and an investigative journalist. He told Theophilus that he wanted to write down “an orderly account” of the things that had happened. So he interviewed the people who were there and witnessed these things about Jesus. He was so meticulous with the details included in his accounts that some 84 people, places, and events have been confirmed by archaeology.

For example, here is what Luke writes in the third chapter of his Gospel: “Now in the fifteenth year of the reign of Tiberius Caesar, Pontius Pilate being governor of Judea, Herod being tetrarch of Galilee, his brother Philip tetrarch of Iturea and the region of Trachonitis, and Lysanias tetrarch of Abilene, while Annas and Caiaphas were high priests, the word of God came to John the son of Zacharias in the wilderness.”

All of those names and details can be confirmed through archaeology. But no such details are given in the mythological accounts of deities dying and resurrecting. You begin fabricated stories with vague generalities and “once upon a time…”, not with the specific members of the government hierarchy structure of the region for that time.

The Gospel of John was written by John the disciple, the one “whom Jesus loved.” His Gospel gives insight into Jesus’ life, ministry, transfiguration, death, resurrection, and ascension – not just from a follower but from Jesus’ best friend. Jesus entrusted the care of His mother to John. His Gospel is a beautiful look at Jesus from a first hand, close friend, account. He reminds us of this in John 21:24, “This is the disciple who testifies of these things, and wrote these things; and we know that his testimony is true.”

3) Furthermore, these are not second or third century mythological legends based on hearsay. They were by those who experienced and witnessed these events. New Testament scholars place the writing of the Gospels between AD 50 and AD 75. Jesus was crucified in the year 30 AD, so these were written within the lifetimes of the eyewitnesses giving these accounts. It would be comparable to you writing 20 years from now about what life was like during the COVID-19 pandemic.

We also have the basic Christian creed recorded by Paul in 1 Corinthians 15, which was written in the year AD 55. In that epistle, Paul was referring back to a creed that he had already taught the Corinthians years earlier. It established that Jesus died, was buried, rose again, and was seen by over 500 brethren, most of whom were still alive at the time Paul wrote that.

4) We have confirmation that this was a real event because of the drastic changes that resulted. In other words, even if we didn’t have any historical evidence of the Revolutionary War, we would still know that some significant real event happened in 1776 because we are no longer a British colony. Before 1776, we were a British colony and then after 1776 we are not a British colony. That indicates that something happened at that time to change the status of this nation.

We can use the same logic when looking at the resurrection of Jesus. Before the resurrection, the disciples had left their families and jobs to follow Jesus. But when He was arrested, they all scattered. They were afraid of the authorities. In fact, Jesus’ own half-brothers didn’t even believe Jesus was God! Thomas wouldn’t believe Jesus resurrected until he touched Jesus’ hands and side for himself. And Saul was busy arresting and persecuting those who followed after Jesus. As a good Jewish Pharisee, he wanted to stamp out this heresy, and he certainly would not have wanted anything to do with Gentiles.

After the resurrection, all of that changed. The disciples were willing to suffer intense persecution for claiming that Jesus was God, and He had resurrected from the dead. In Acts 5, Peter and John were beaten for continuing to preach the name of Jesus and they left “rejoicing for being counted worthy to suffer for His name.” Eventually all of the first eye-witnesses were beaten and executed for preaching the name of Jesus.

Jesus’ half-brother James became the founder and leader of the church in Jerusalem. Thomas was willing to leave the Roman Empire to go into Persia and India to preach the name of Jesus – and was stoned, then stabbed to death for it. Saul changed from persecuting Christians to bringing others to follow Christ. He no longer hated Gentiles, but took the message of Jesus to the Gentiles and affirmed the validity of Gentile salvation at the Jerusalem council.

But the lives of the disciples were drastically changed when they encountered the resurrected Jesus. They were willing to die for the claim that Jesus was God and resurrected from the dead because they knew it was true. And that changes everything.