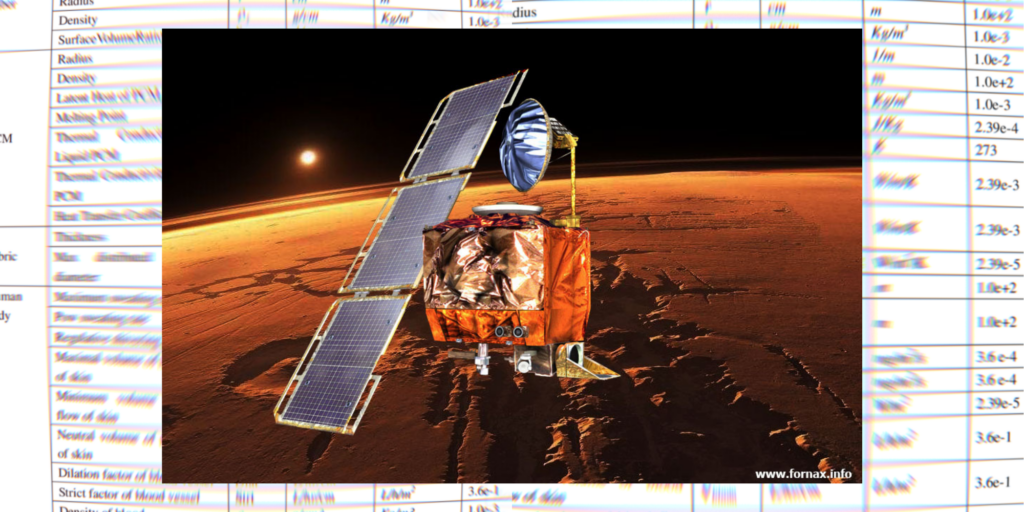 On December 11, 1998 NASA launched the Mars Climate Orbiter Probe on a 9.5 month, 416 million mile journey where it would study the climate, atmosphere, and surface changes on Mars. On September 23, 1999 the Mars Climate Orbiter Probe began its planned orbital insertion maneuver. Four minutes after the main engine burn began, communication was lost with the Probe and it was never reestablished. By September 25, 1999 the mission was declared a loss.

According to the Mars Climate Orbiter Mishap Investigation Board Phase I Report, “The spacecraft trajectory was approximately 170 kilometers lower than planned. As a result, MCO either was destroyed in the atmosphere or re-entered heliocentric space after leaving Mars’ atmosphere.”

What would have caused the orbiter to do that?

The investigation board discovered that one piece of equipment had calculated its output in the units pound-force seconds. However, the trajectory calculation software using that calculation was expecting it in the units of Newton seconds (which is incorrect by a factor of 4.45). By using the incorrect units of measure, the orbiter was placed at an altitude much lower than it was capable of surviving. The loss of this $327.6 million mission came down to a failure to correctly convert units.

I thought of this issue this past week as I was reading 2 Peter 3:8 with my children. It says, “But beloved, do not forget this one thing, that with the Lord one day is as a thousand years, and a thousand years as one day.” If we pluck just this verse out of context of the rest of the epistle, it sounds as though God is giving us a conversion factor.

And to my young literal-minded children, I could see them storing this nugget away in their minds the same way they’ve stored other conversion factors. “Ok, 12 inches equals one foot; 3 feet equal one yard; 1 human day equals one thousand God-years. Got it.”

But that is not what Peter means here at all. We must consider this verse in context to the rest of the passage. In verses 3 through 7, Peter is reminding believers that there will be people who mock the idea that Jesus is coming again. In their arrogance they will look around and say, “Well each day just goes on like the day before! Clearly Jesus is not coming again!” So these people scoff at the idea of God coming to judge the world.

As Peter points out, this was exactly the mindset of people in the days of Noah before the flood came. They thought the same thing, right up until the door of the ark was closed and “the springs of the great deep burst forth, and the floodgates of the heavens were opened.” They mocked the idea of God judging the world because each day seemed to pass just like the day before. But they were terribly wrong.

Peter warns believers that it will be the same way when God comes again for the final judgment. People will laugh at the idea, right up until God brings His judgment by fire across the globe, just like the flood. They will mock the idea that God will return to judge the world because each day seems to go on just like the day before. But they will be terribly wrong.

Peter wrote this epistle in circa AD 68, shortly before his execution by Nero. It had been roughly 38 years since Jesus had been crucified and had resurrected. And these believers were already wondering why it was taking so long for God to come back. Here they were surrounded by mockers and scoffers about the second coming of Jesus. Why won’t God come back and prove all of them wrong? Why was God taking so long to return?

Peter explained to them, “But do not forget this one thing, dear friends: With the Lord a day is like a thousand years, and a thousand years are like a day. The Lord is not slow in keeping his promise, as some understand slowness. Instead he is patient with you, not wanting anyone to perish, but everyone to come to repentance.”

Now that we know the context, let’s look at this comparison Peter makes about days and years. He is not making a unit conversion that one man-day = one thousand God-years. And he certainly isn’t establishing this conversion to be applied to other places of Scripture that talk about days and years. That would be misapplying Scripture out of context.

Instead, Peter is reminding believers that God exists outside of time. God is not constrained by our calendar keeping systems. God stands outside of our time and sees the beginning and the end of the entire story, where we can only see a small fraction of it. Our days and years seem like they drag on forever, but it is not that way to God. God is working through all of this time to complete His story for each of us. So what seems like a long time in our earthly, finite minds is really not even a blip on the radar with respect to eternity.

In explaining this to my children, I thought about how that very week my son was counting down to his birthday. To him, two more days until his birthday seemed like FOREVER. Why was it taking so long for his birthday to get here???

However, I was counting down the days a little differently. Only two more days?!?! But I’ve got to get the cake, and wrap presents, and finalize the party arrangements on top of still doing school and going to piano lessons and baseball practice and soccer games. How was I going to get all of this done in only two days?!? And on top of that, just two more days until he is another year older?? How did time go by so fast??

In the same way, God is taking care of a lot more than we can ever imagine before He returns again. He is operating on the big calendar for what all must happen before we, the world, are ready for His return. And this is probably the most important part in this passage. Peter explains why God is taking so long.

God is being exceedingly patient with us so that more people can find repentance. If God had answered the prayers of the believers in AD 68 to return again, where would that leave us now? And here we are in the year 2020, nearly 2000 years later, still wondering why God is being so slow to return.

If Peter’s words were a comfort to those believers in the year AD 68, they can certainly be a comfort to us now in 2020. God will return again and judge the entire world with judgment by fire. His coming may seem delayed to us, but He is not slow in the way we consider slowness. He is working all things together in His perfect timing before He returns so that more people will find repentance. For that, we should be grateful.

But when God does return, it will be without warning, just like in the days of Noah. Therefore, we must heed the rest of what Peter instructs in 2 Peter 3:10-14:

“But the day of the Lord will come like a thief. The heavens will disappear with a roar; the elements will be destroyed by fire, and the earth and everything done in it will be laid bare. Since everything will be destroyed in this way, what kind of people ought you to be? You ought to live holy and godly lives as you look forward to the day of God and speed its coming. That day will bring about the destruction of the heavens by fire, and the elements will melt in the heat. But in keeping with his promise we are looking forward to a new heaven and a new earth, where righteousness dwells. So then, dear friends, since you are looking forward to this, make every effort to be found spotless, blameless and at peace with him.”