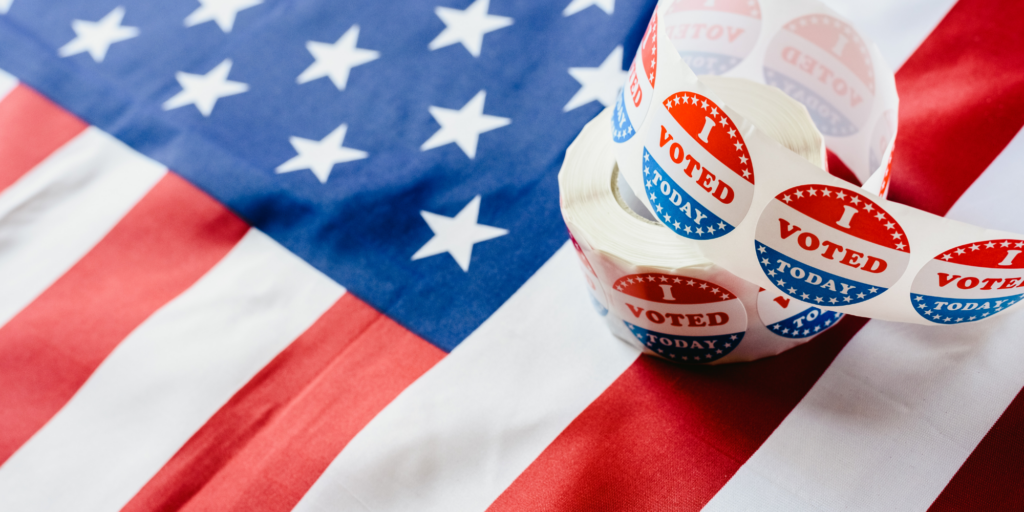 With the election coming up, we need to take a moment to think through some important principles about the United States Presidential election.

1. Politics are important to religion. Many people within the church try their best to stay out of political discussions. Honestly, in this kind of political climate, who can blame them? But as believers, we can’t shy away from politics because politics directly affect our ability to practice religion.

As the power and control of the government grows, it begins to limit the free exercise of religion. And our founding fathers were keenly aware of that. This was why they set up a limited government. They knew and understood the consequences when government stepped on individual freedom, particularly freedom of religion. The original settlers from England were fleeing a King who dictated to the people what religion they must follow.

Therefore, this nation’s founders knew it was critical to establish that our rights for life, liberty, and the pursuit of happiness were not granted by the government, but by God. The principle of freedom of religion was of upmost importance; it was the first amendment. Our nation’s founders knew the government must be restricted so that the people can freely choose their worship.

The First Amendment mimicked Constantine’s Edict of Milan in 313 AD. It stated, “We have also conceded to other religions the right of open and free observance of their worship for the sake of the peace of our times, that each one may have the free opportunity to worship as he pleases; this regulation is made that we may not seem to detract from any dignity of any religion.”

The Edict of Milan brought an end to the state-sanctioned persecution of Christians, who were being executed simply for choosing to worship Jesus. Roman politics directly affected the practice of religion, particularly the Christian religion.

We still see this across the globe today. Consider China, North Korea, or Iran. Those citizens are not free to worship as they please. Even in a place like Russia, their citizens are allowed to “be” Christians but are not allowed to “do” any Christian things. Their lack of religious freedom is directly correlated to their politics.

God is still all-powerful in these religiously-closed countries, so His church will continue to grow. But Christians must be mindful of how they share the Gospel and make disciples. The body of Christ will grow but it will be under intense persecution.

We may look at that as being an issue only somewhere else in the world, but if we quit paying attention to politics, that can be what it is like here. We are witnessing our culture and politics disintegrate into this “cancel” mentality, and our religious freedom is being threatened. If you adhere to a different ideology than the mob, then you are effectively canceled. It is a movement demanding “groupthink,” as Orwell put it.

As this seeps into our politics, religious freedom is placed on the chopping block. This is why politics is important to religion. Politics directly impact your ability to practice religion. And this should be a concern of not just Christians, but all people.

Unlike the disciples in the Roman empire, we actually do have a voice in our government. As American citizens we have a responsibility to participate in a government that was set up to be for the people and by the people. And what would Jesus say when you were given the opportunity to speak up for His kingdom yet didn’t?

If religion is important to politics, what do we do about “separation of church and state”? Since that line is pulled out in nearly every discussion a Christian has on politics, it would do us good if people understood where that actually comes from. And it’s not the Constitution.

It came from a letter Thomas Jefferson wrote to the Danbury Baptist Association in 1802. He was discussing how government should not interfere (or prohibit) the free exercise of religion. It was an expression of how the government cannot mandate a religion or outlaw a particular religion. Jefferson was reiterating the premise of the First Amendment, which was written to limit the government, not limit religion.1

Nowhere was Jefferson expressing a view that government should be devoid of religion. In fact, it was Jefferson’s words in the Declaration of Independence that stated our unalienable rights are given to us by God.

The government cannot forbid you from worshiping whatever and however you like (assuming that worship does not then violate other laws). But nowhere does that mean religion has no place in the government. In fact, George Washington said, “Religion and morality are indispensable supports of our political prosperity.” And John Adams said, “Our Constitution was made only for a moral and religious people. It is wholly inadequate to the government of any other.”

So when did all of this change? It was in 1947 in the Everson v. Board of Education decision made by the Supreme Court. It was a 5-4 decision that stated the government could not “pass laws which aid one religion, aid all religions, or prefer one religion over another.”

3. Abortion is a bigger issue than people want to admit. As this election nears and people are torn between two less than ideal candidates, articles are floating around trying to downplay the abortion issue, convincing Christians that other issues are “just as important.”

Or they try to convince Christians abortion shouldn’t be a deciding issue this election since the President can’t overturn Roe v. Wade anyway. They claim that’s not a Presidential decision but a court decision (a highly ignorant argument to make at this point as the left is currently enraged that Trump has appointed a pro-life Justice to the Court). Yet one important way the President has affected abortion is by preventing your tax from paying for abortions.

As for other election issues, when Republicans and Democrats disagree over those issues, like the most effective way to provide for the poor, modify healthcare, or reform illegal immigration policies, it doesn’t mean that one side doesn’t care about those issues. Both sides care very much about those issues. They are just proposing different ways to do that.

However, when one side not only allows, but celebrates, the dismemberment and annihilation of an entire segment of the human population, that cannot and should not be overlooked. That shouldn’t just be a concern for Christians, but for humans.

I mean, if your dog groomer made 90% of its income from drowning puppies, you wouldn’t overlook that simply because they do a good job shampooing your dog. I would think most people would find that to be a deal breaker – no matter how good a shampoo job they did. Yet people are willing to overlook genocide in this nation because they prefer one platform on climate change and tax reforms over another.

Now, I don’t like it when people call their ideological opposite “Hitler,” not only because it is an ad hominem attack, but because it trivializes the actual atrocities of Hitler. But in this case it is a valid comparison. Would we have said Germans were right to overlook the concentration camps of the Nazi regime as long as Nazis provided better welfare for the poor? Would the Nazi policy on public education be enough to overlook the Holocaust? I would think not. The same thing applies to our culture.

The slaughter and dismemberment of millions of innocent people should not and cannot be categorized in the same way as socialized health insurance and free college tuition. It really highlights how numb (and maybe how dumb) we are to this evil when we overlook abortion for another social issue.

While there are always lots of issues to consider in an election, we cannot consider all issues equal in weight and importance. As long as one side is calling for the legalization of the mass murder of innocent human beings, it shouldn’t matter what the rest of their platform proposes.

The reason so many people consider abortion the biggest issue in this election is because abortion is bigger and more evil than any other issue. Not killing people should be more important than tax reforms and climate change legislation.

Just like people in the 1800s were right to vote solely on the issue of the abolition of slavery, so should we consider abortion that important. Slavery was too evil an institution to be overshadowed by a candidate’s tax reforms or education policy. Abortion should be viewed as that evil and sadistic for us today.

4. It is a job application, not a popularity contest. This is a tough thing for most people to realize since we are bombarded with talk about polling and the “popular vote.” But any election, aside from your high school class officers, should be about who is the best fit for the job, which may not necessarily be the most-liked candidate. While it would be great if both of those things came in the same package, ultimately it doesn’t matter if I’d enjoy sitting down with the President for a chat or not. It matters if this candidate is going to keep this nation free or not. And that should be the concern for not just Christians, but all Americans.