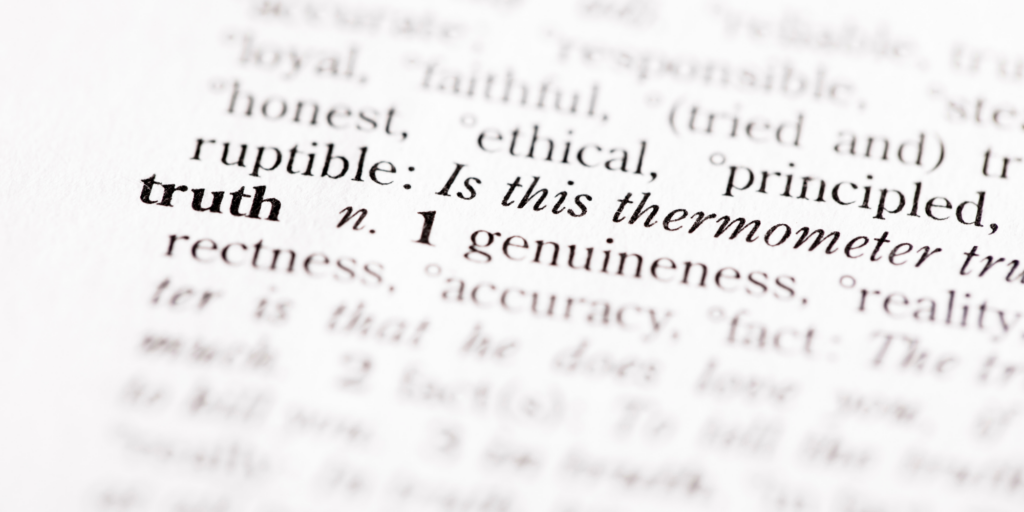 Ideas have consequences. And right now the ideas that are being taught are wreaking havoc on our society. In a previous post, I discussed five ideas that are damaging society. This post will take on the third idea: relative truth.

The truth matters! But somewhere we started being taught two very damaging ideas: that truth is relative to the individual and that truth does not exist at all. The questions shifted from “Is that true?” to “Is that true for you?” It is a subtle difference but has huge implications.

When there is no absolute truth, everything is up to the feelings and experiences of the individual. No wonder we are confused about gender identity and sexual orientation. No wonder we respond with violence and hate in discussions on ideas. No wonder we only see those with whom we disagree as evil, instead of just right or wrong. We don’t have an absolute truth to apply to those situations anymore.

But is that true?

Is it true that there is not truth?

Read that question again. Hopefully you can see the ridiculous conclusion from our post-truth culture. The post-truth philosophers make a truth-claim to say there is no truth, which then violates their own truth claim! If it is true that there is no truth, is that statement then therefore not true? And if it’s not true, then there is in fact truth! It is a self-defeating statement.

If that feels like you’ve walked around in a circle, it’s because you have!

Yet we constantly hear phrases like “that’s his truth” and “that’s my truth.” Or we’re told to “live your truth.” You can now “identify” as something that’s different from the truth of your physical characteristics. “Lived experiences” replace reality so that no one’s opinion can ever be corrected.

We have been taught “truth” depends on whatever narrative, traditions, institutions, and practices a particular person finds as their truth. And how many Disney movies broadcast the message to find “the truth within you.” As a result, anyone who claims to have ultimate truth must be canceled because they are stepping on someone else’s truth.

The battle before us is whether truth is relative or absolute.

Can we all have our own version of truth? Can things be true for you but not true for me? That may seem legitimate. In some ways, we are all made up of our experiences. For example, your truth may be that roller coasters are terrifying. My truth may be that they are exciting.

It might be appealing to live in a world where absolute truth does not exist. You get to do whatever you feel like doing. You can hold whatever ideals you choose, no matter how ridiculous they may be.

But there is still an absolute truth that if you are standing on the tracks that oncoming train will hit you. Your feelings about the train, your lived experiences about trains being pleasurable or not, does not remove that reality of the existence of the train. The relative truth world is an unlivable world.

From a Christian perspective, this is the real danger in a post-modern society. Hell is a reality, whether you believe in it or not. There is a real warning for those who are heading there. It is an absolute truth that is unavoidable no matter one’s opinion about it. This is what spurs us on in our witness to those who are lost, and should encourage us to find ways to break down those barriers – even the relative truth ones.

In John 14:6 Jesus said, “I am the way, the truth, and the life.” In that statement He is saying that truth is absolute and truth is knowable. He didn’t say, “I may be true for some people, but not for others.” Now, some people may believe that He is the truth, while many others do not. But that doesn’t change the truth about who He is. The deity of Jesus does not diminish if people do not believe in Him, just like the facts about the roller coaster do not change whether you think they are fun or not.

Jesus claimed to be the truth. And he backed up that claim by healing the sick, raising the dead, calming the storms, feeding the thousands, and resurrecting from the dead. Therefore, anything that contradicts what Jesus says and does must be false.

When a new idea is presented, weigh it to determine what is worthy and what is not based on God’s Word, not on the opinions of man or the ideas of the world. That is living by the truth, and the truth will set you free.